Mackenzie celebrate their expansion into the adult market 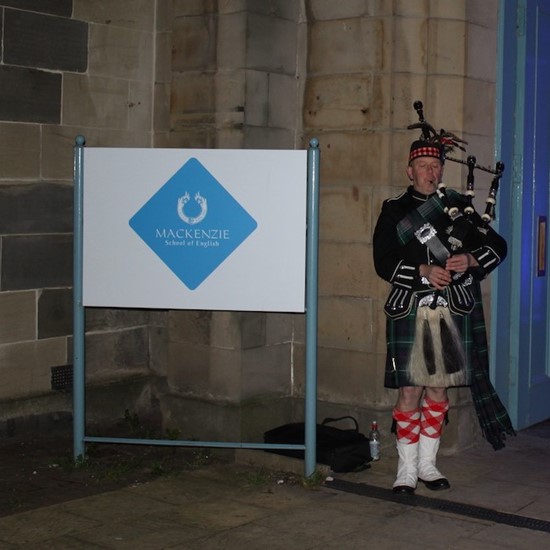 Last month Mackenzie School of English in Edinburgh hosted their launch party, celebrating their expansion into the adult market and their move into lavish new premises.  The special event was attended by 100 local and international guests, including suppliers, agents and industry representatives.  The School exterior, a beautiful example of 18th century architecture, was lit up in red to mark the occasion whilst the modern interior was ambiently presented with soft lights and thistle displays.  Attendees were treated to dinner, drinks, live music and even a hog roast in the later hours.

Director Chris Moonie, dressed in a traditional kilt ensemble, welcomed his guests by talking about the journey that himself and the School had been on before reaching their current destination.  He confessed that he was 'standing in the School of (his) dreams' and concluded that 'To be in this industry you have to be thriving. It a forever changing, fast-paced industry. Since 2008 we have worked tirelessly for students to feel at home in Edinburgh, Scotland, and encouraged to be all they can be.  We wanted to facilitate not only a study holiday but also an unforgettable life experience.  We are in this industry for our students'.  He described his intentions to 'continue to thrive'.

His staff were the perfect example of a team who work tirelessly; overseeing the evenings event with the enthusiastic and committed approach Mackenzie School is so proud of.

The launch was a celebration of their success to date but also a nod to the future and their intention to providing outstanding programmes and tailored solutions for both young learners and adults for many years to come.  And with a fabulous new building, continuously improving programmes and one of the most committed, hard-working and creative teams around, there is no doubt they will continue to prosper in the EFL world.